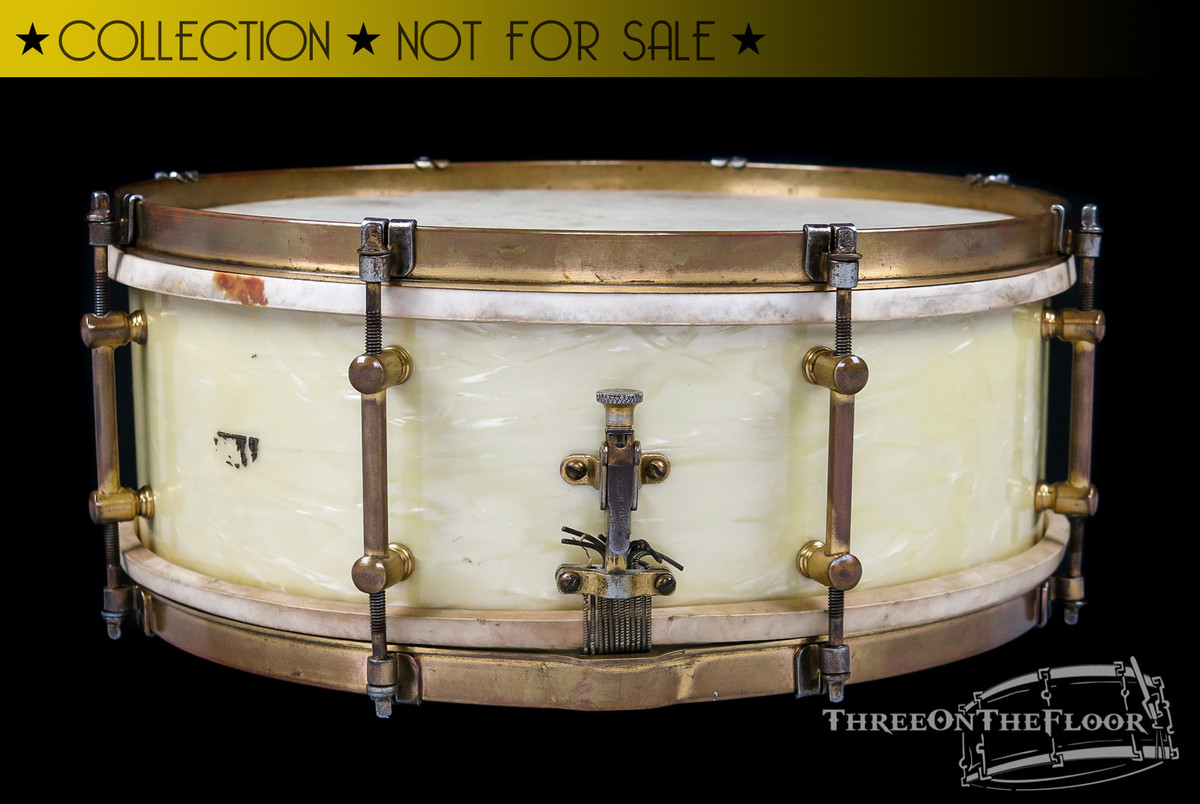 Well known today for both guitars and drums alike, the Gretsch company set high quality construction and design standards across multiple instrument manufacturing early on in the race to build musical instruments. The company was first established as a small instrument shop in Brooklyn, NY by Friedrich Gretsch in 1883. Following Friedrich’s early death, his son Fred Gretsch, Sr., took over the family business and soon grew the Gretsch company to become the largest musical instrument production facility in the world by the 1920s.

Fred Gretsch, Sr. developed the first ply laminated construction drum hoop in 1917 and eventually released the first ply construction snare drum shells in 1927. This completely revolutionized drum manufacturing and every competing company soon followed suit. At the time, Gretsch prided themselves on a method of bending the plies under heat and pressure that resulted in a more precise and durable shell than the construction process of gluing veneer prior to bending that was used by rival companies. This method of construction remains the industry standard even to today. It provided to be more cost effective and durable option to building drums, keeping them more in round and eliminating the troubles of bending a solid piece of wood for deeper model drums.

Gretsch released the “Gretsch-American” model snare in 1927 that featured both wood and metal shell options. The wood shells featured this newly designed 3-ply shell and borrowed hardware designs from the banjo production that Gretsch was well-known for. This particular drum was listed as the “Orchestra” model drum and features the 3-ply maple shell, free of any reinforcement rings. While the 1927 catalog lists options including maple, mahogany, and Duco Ebony shells, it is possible that this drum may be of a slightly later build, or a special order, considering the White Marine Pearl wrap in addition to the two-point contact tubes lugs. The catalog illustrations depict single point lugs used for wood shells and two-point contact tube lugs used for metal shells. Along with the gold plating option, this was likely built sparing no expense and would have been a flag-ship snare of this production period.

This model snare also launched the first throw-off style strainer that Gresch used which were built by Duplex. Duplex started building instruments around the 1880s and supplied many drum manufacturers during the early 20th century with parts. This strainer allowed drummers to drop the silk wire-wound snares off of the resonant head of drum and play without the crack of strands. This was used by Gretsch from 1927 until the introduction of the Broadkaster strainer in 1936. The “Gretsch-American” model decal is still partially represented on the drum. The drum is free of any modifications and sports all era correct parts, including calf slunk heads.