Born on June 18, 1906, Ray Bauduc became one of the most iconic swing / bebop drummers of all time. Best known for his work with the Bob Crosby Orchestra, and the side band, the Bobcats, Ray was one of the most prominent WFL endorsers in history. He appeared on many WFL ads and promotional spots including the 1939 WFL catalog cover. WFL produced a signature Ray Bauduc “Dixieland Swing” Model snare drum from 1937 through 1939 and introduced an entire outfit labeled as the “Ray Bauduc Swing Outfit” in 1951, which continued through 1957. 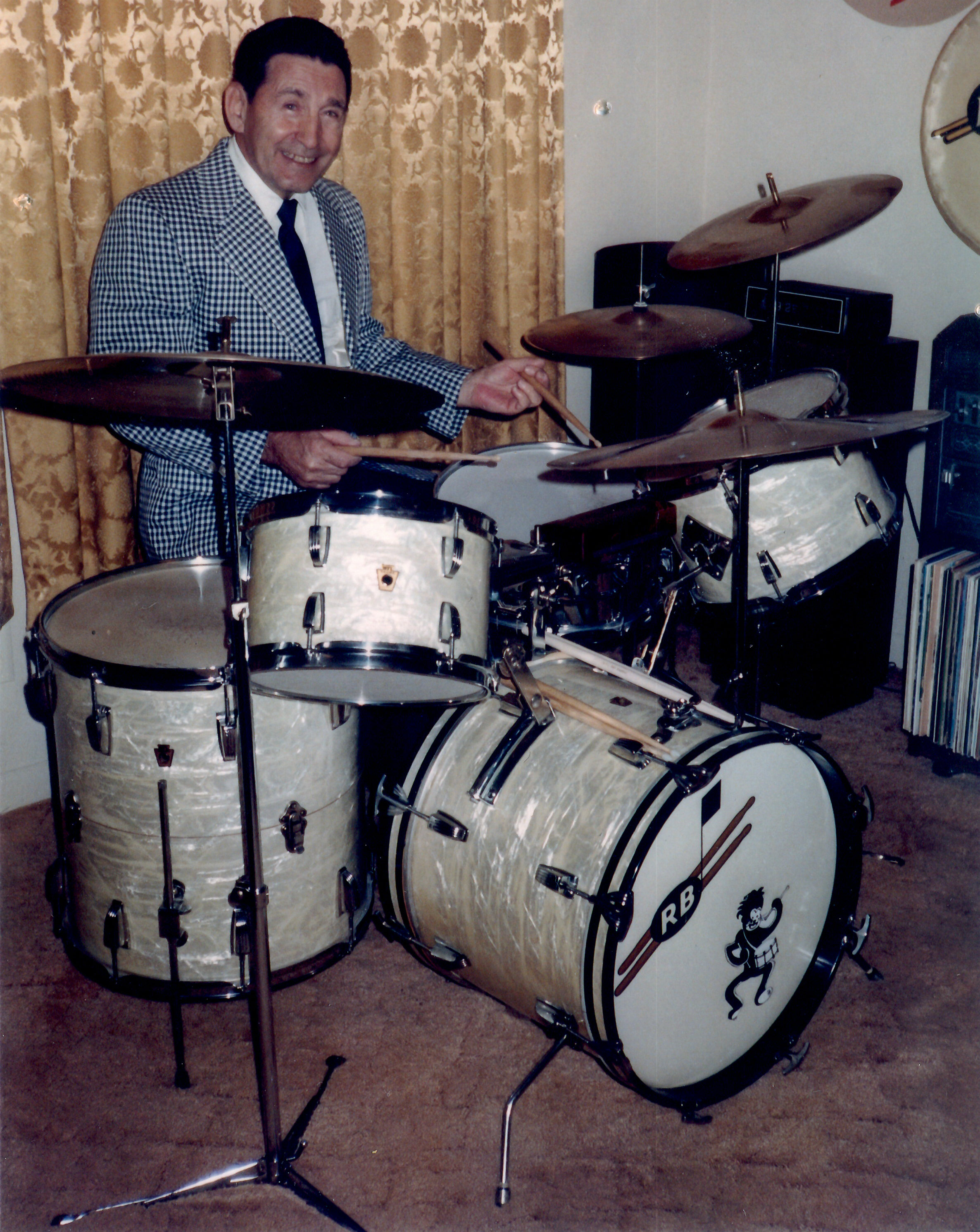 The drums here were acquired from a collection of Ray’s personal equipment located in Florida. When Ray passed in 1988, while residing in the Houston Texas area, many of his drums were gifted to a good friend of his from his widow. This kit, along with many other drums were later sold to a collector and player in Florida. Luckily, the drums have not been tampered with or modified in any way since leaving Ray’s possession. Many of the heads around the kit are either factory original or dating from the 60s. The bass drum retains the original ‘Playton Plastic’ heads on both the batter and resonant sides, including Ray’s initial decal logo and his animal type character that became a signature of his.

While never featured as an option in any catalog, Ray was known for having a very unique setup of sizes and configuration since the beginning of his stardom career in the 1930s. The drums featured here are special in that they may have been the very last set that WFL built to Ray’s custom specs. The toms consist of a 8”x12”, set up immediate player left, a 7”x11” to the right and a latching canister type 16”x16” floor tom. These canister floor toms can be seen in photographs dating back to Ray’s endorsement transition from Slingerland to WFL in the 1940s. The Super Classic snare drum is the only drum not originally purchased with the kit, but recently added as a perfect addition, matching the Ray Bauduc outfit specs in the 1950s catalogs. The bass drum features a 14”x18” shell, which may be the earliest 18” Ludwig built bass drum currently known to exist. There is no evidence of Ray having used smaller bass drums during his career, as many photos show him playing larger bass drums. That considered, it is likely that this was a special request he made to WFL leading towards his retirement.

Along with the drums is all of the original 1950s WFL hardware that belongs to the kit and the original fiber build cases, labeled with Ray’s return information and marked with sizes of each drum on the exterior of the cases. The cymbals shown are all 1978-81 Zildjian K’s, closely resembling the sizes and positions that was Rays configuration of Avedis models. The outfit also includes numerous pairs of Ray Bauduc signature model sticks spanning from the 1930s - 1950s, WFL burlap bags of spare parts, photos of Ray, the 1939 catalog with Ray featured on the cover and a very cool original photo negative of a 1940s Slingerland ad while prior to Ray’s WFL endorsement. 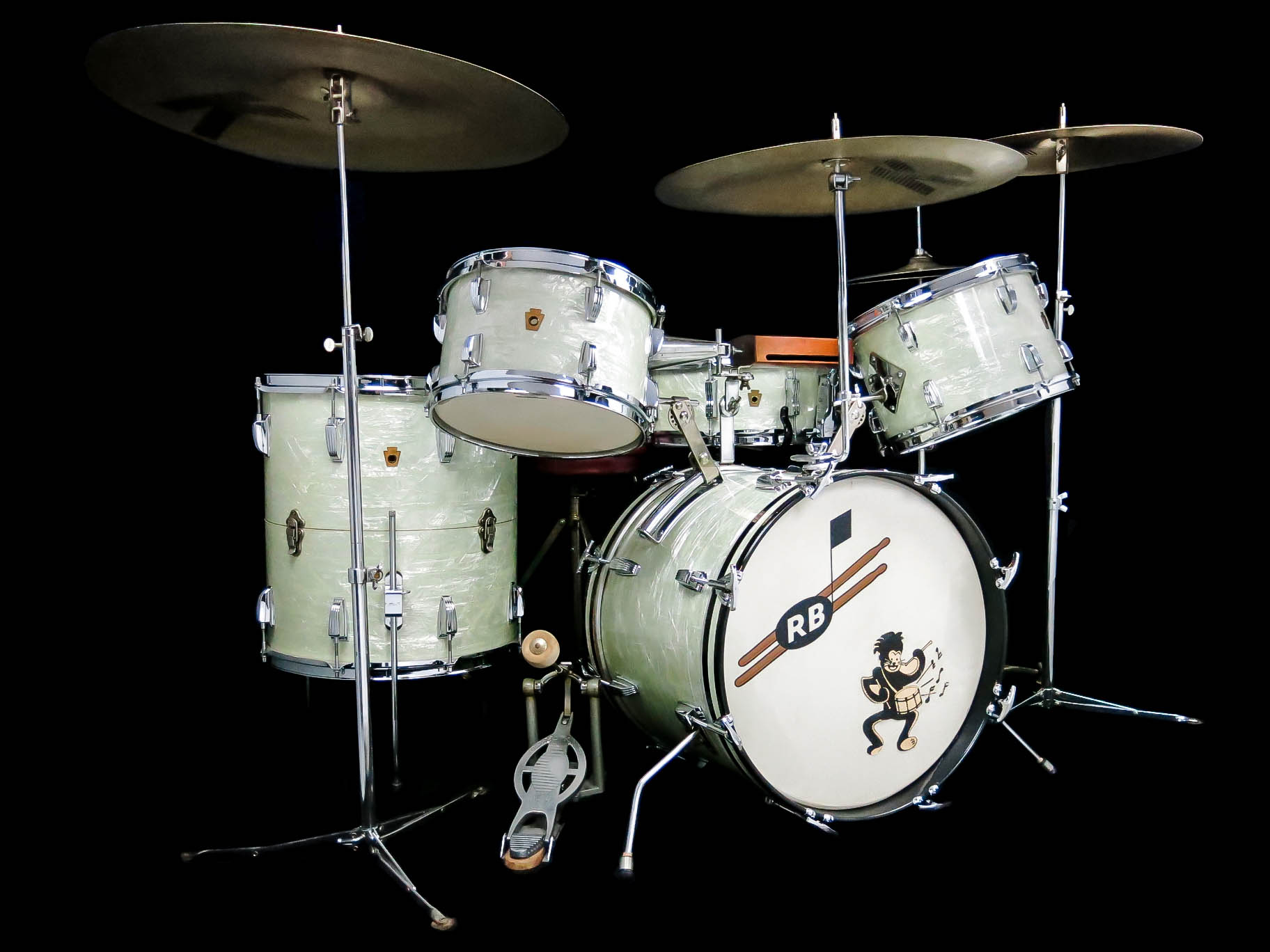 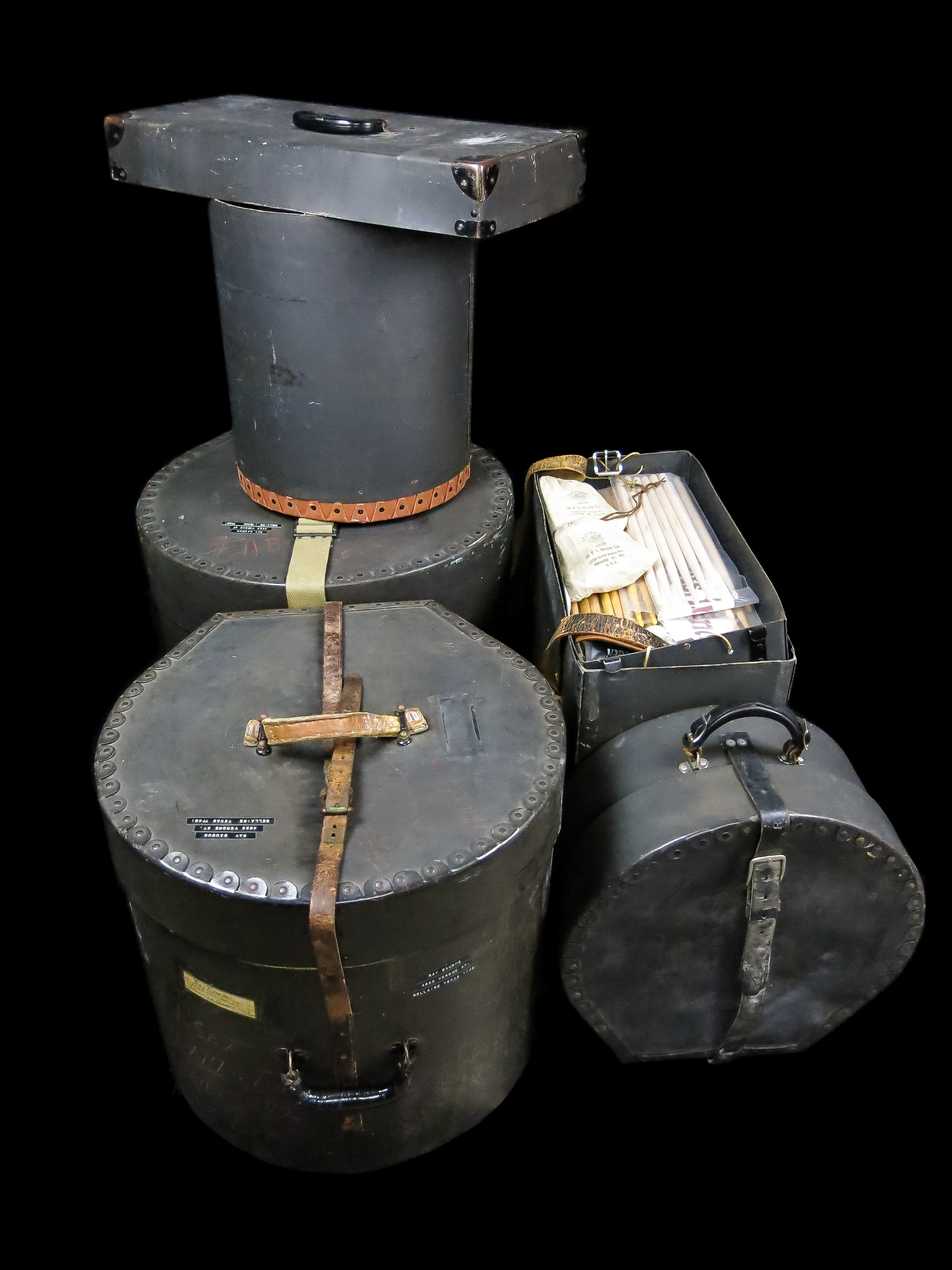