The topic of Peacock and Rainbow Pearl finishes is somewhat of a confusing one… but lets try to decipher what’s going on with these crazy colored old drums. 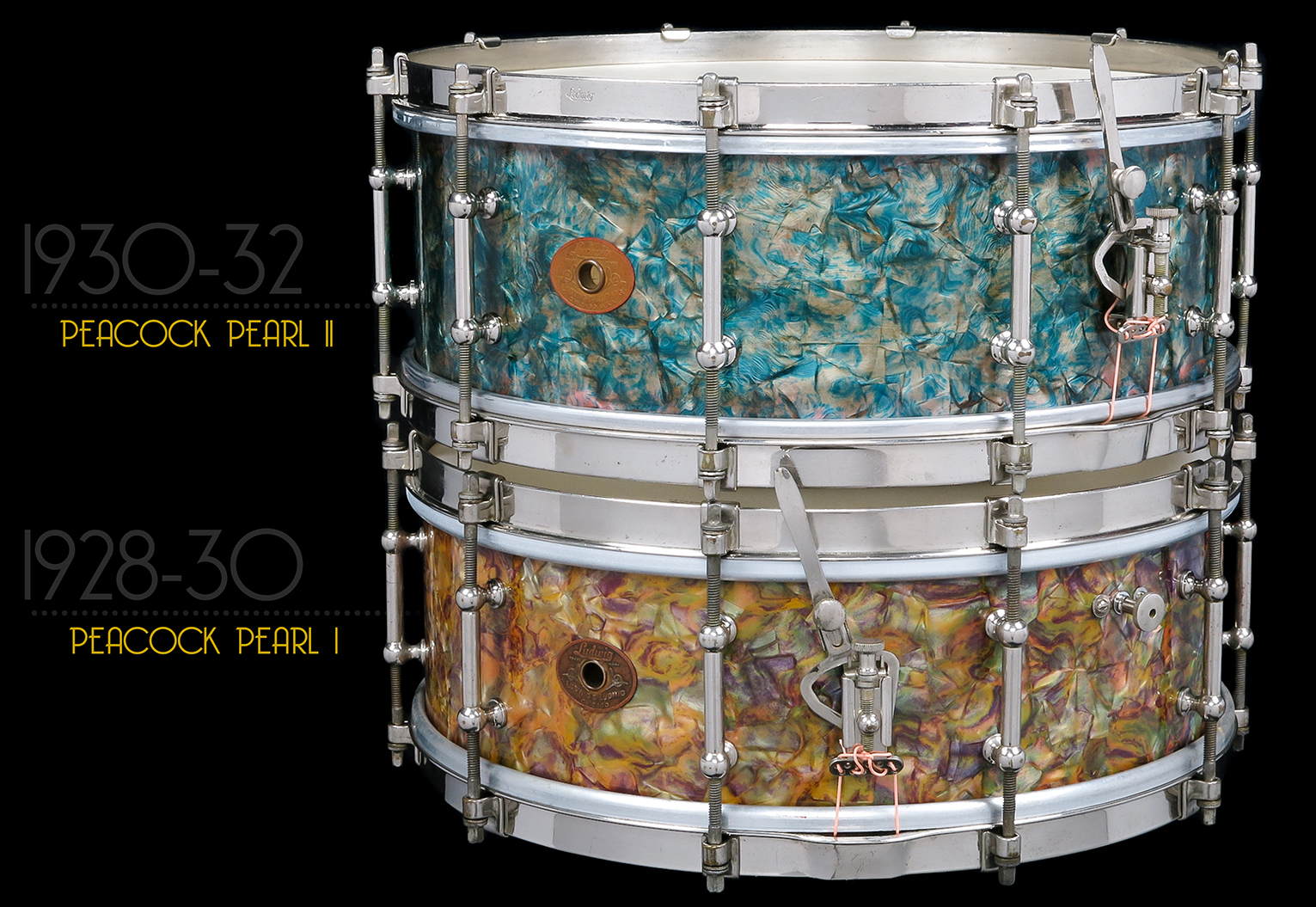 Ludwig released an array of new pearl finishes in the 1928 catalog and among these included the “Peacock Pearl” option. (image 1) This finish continued to be an option in the Ludwig catalogs through 1932. However, the wrap saw a little revision around (roughly) 1930. (Peacock : Type I) Prior to 1930, the wrap had a swirl of multi-colors, often found as more warm in color temperature due to how the wrap faded over time – heavier on the reds/oranges - this version of the wrap is notorious for fading. Unfaded versions of this wrap were truly rainbow in color with plenty of greens, blues, and even some bright yellows. (image 2)

(Peacock : Type II) Slightly more common, the second version of the Peacock wrap became more heavily blue/green colored and the pattern slightly changed to a more classic ‘marine pearl’ pattern. In the 30s, many pearl wraps were backed by cheese cloth which can be seen through the translucent material as a checkered backing. Type II can be found both with and without the cheesecloth backing. There is no hard identifier as to what the difference is outside of evaluation based on the pattern and color.. and this can be slightly more difficult at times based on the fading and variations in patterns.

(Rainbow Pearl) : Rainbow Pearl was a finish introduced by Leedy in 1929 and produced into 1930. This finish resembled the Type II Peacock finish fairly closely however these Leedy examples are very difficult to find. There are only a hand full known as of now. (image 3)

1) Ludwig DID in fact list a ‘Rainbow Pearl’ outfit in their early 1930s catalogs, however the finish illustrated was a Lavender Pearl, not Rainbow Pearl. (image 4)

3) There have been a couple examples of Ludwig drums and Leedy drum around this era surfacing with finishes from across catalogs.. this could be contributed to fact that Ludwig & Ludwig and Leedy were both owned and built by the C. G. Conn Co. in the same building around this time.

4) Finally, its worth noting that Rob Cook’s Ludwig book mixed up labeling the Type I and Type II Peacock finishes under Mike Curotto’s collection.

Hopefully this helps clarify a general understanding of the Peacock wraps. This is by far one of the most beautiful arrange of finishes offered and one that continues to appreciate in collectibility. 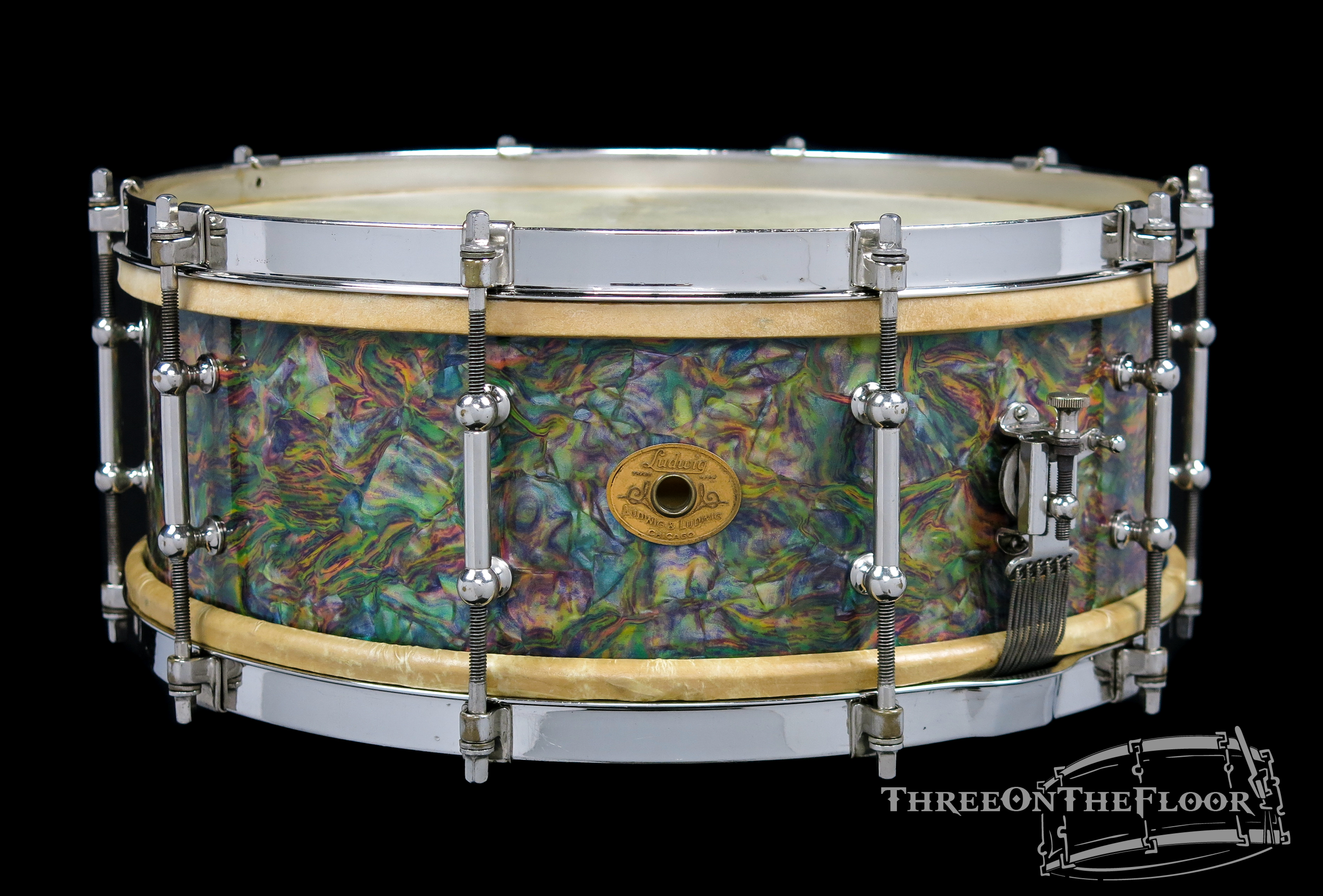 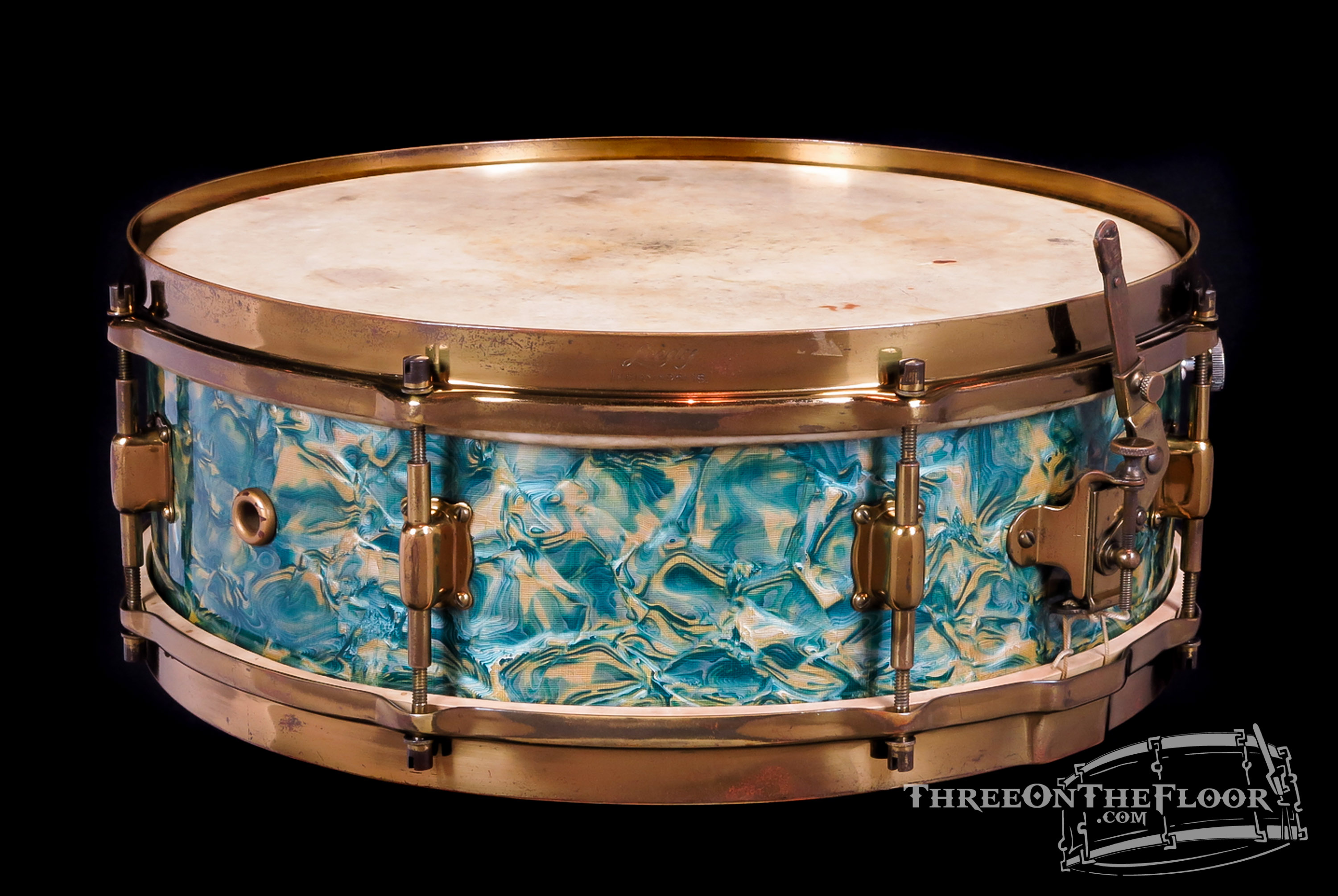 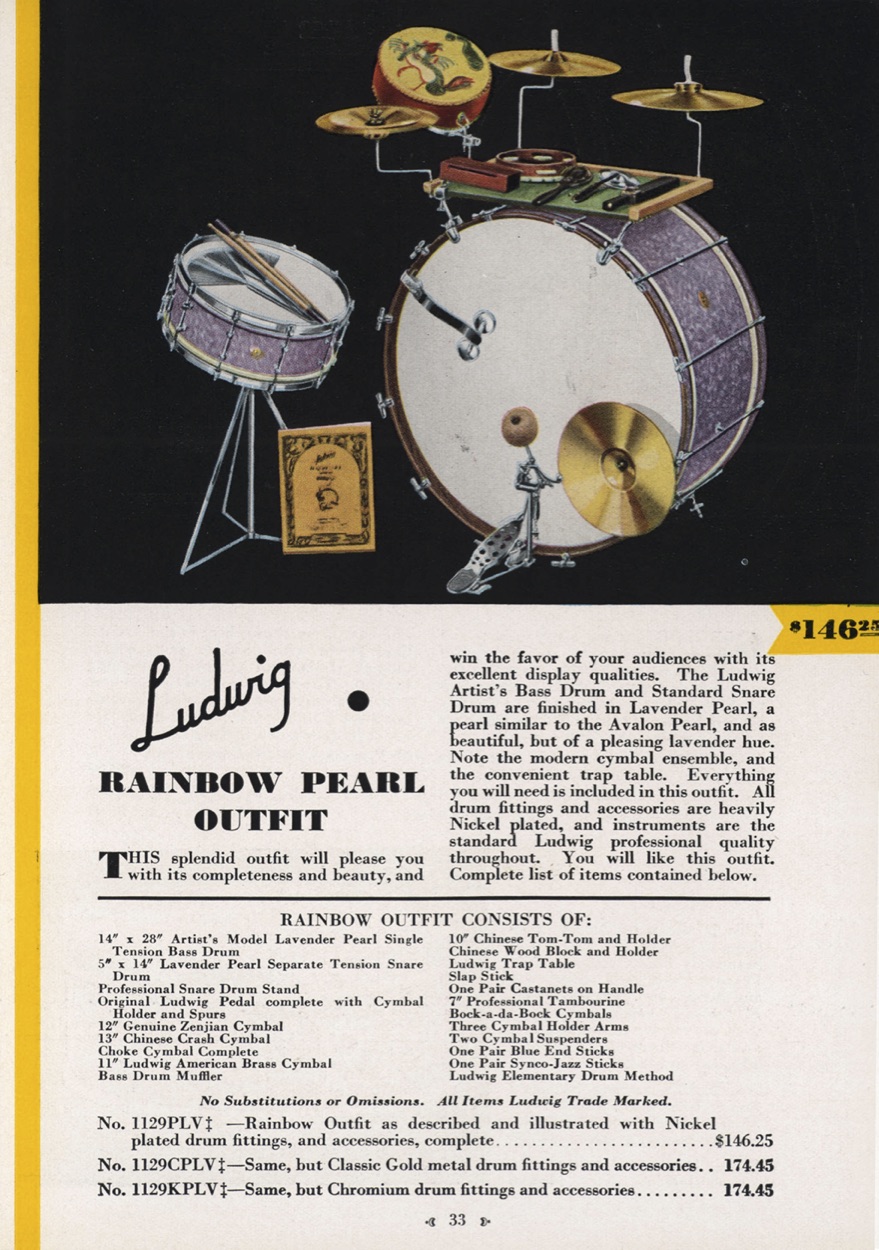 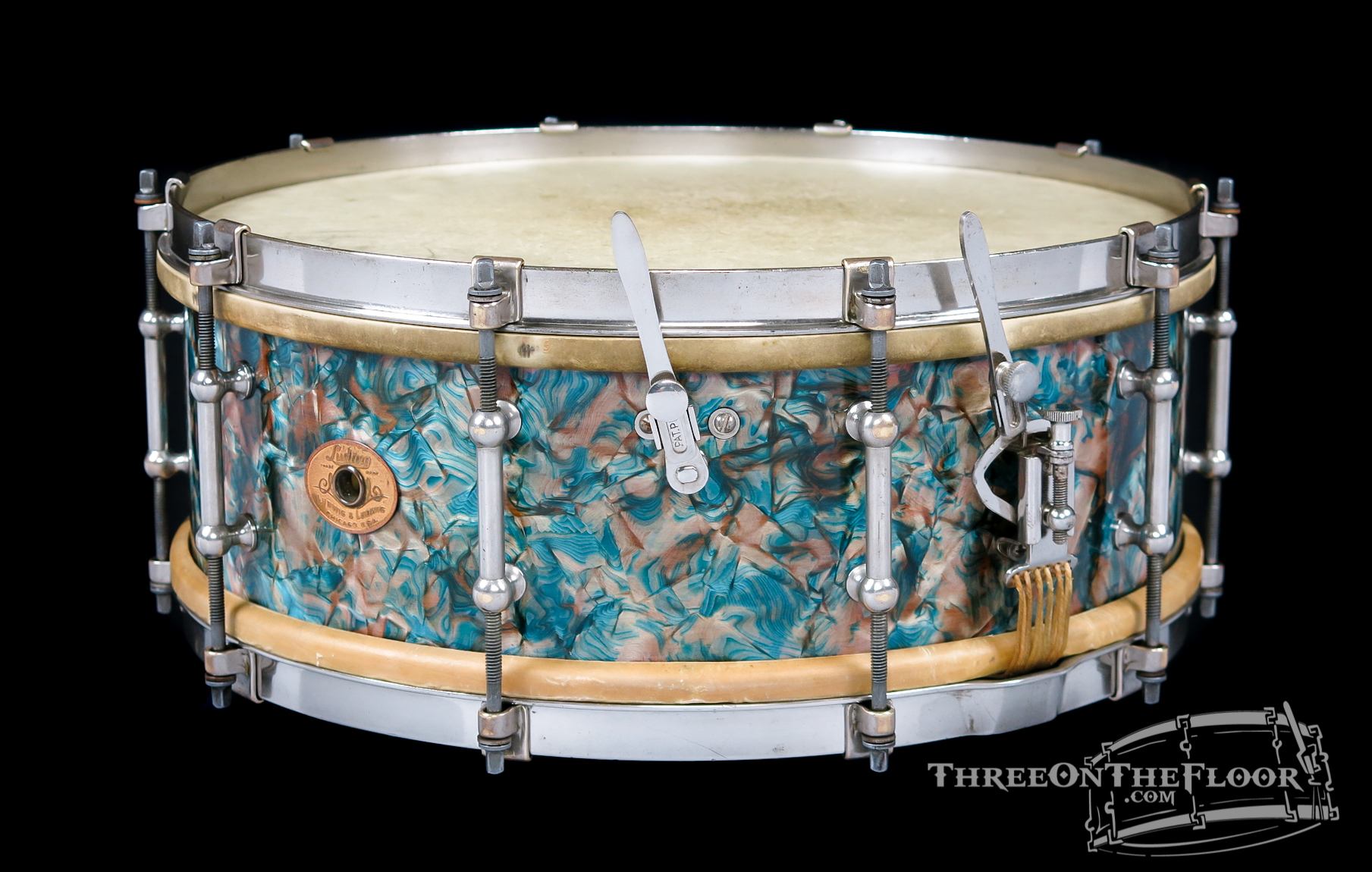